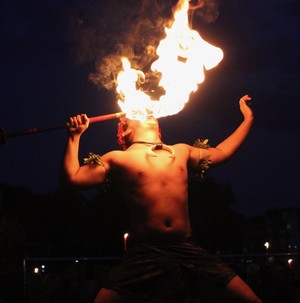 As they say: „we are a family from Hawaii”. They have travelled around the word, sharing the culture of Hawaii and the American Native Indians.
The artistic program prepared for the festival includes authentic and elaborated dances, which will feature the best and most exciting dances of Hawaii, including graceful hulas, which tell of the beauty of the islands and the joys of living in “Paradise” Hawaii, Maori dances from New Zealand, American Indian Navajo Hoop Dance, where the dancer weaving the hoops making shapes of nature such as flowers, bees, butterflies, birds, snakes, horses, snowflakes, etc. 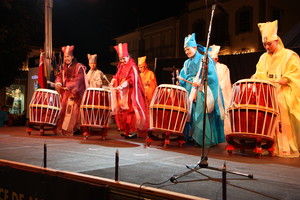 The KOTII Jiphyun group is a JIPHYUN Ritual And Play theatre group which was founded in 1999 with the aim of spreading the culture of Ritual and Play, encouraging young people and adolescents to grow and appreciate their own roots and also fostering social projects and the preservation of the environment.
KOTTI has performed at various International festivals stages in Italy, Thailand, Hungary, Mexico, Serbia, and throughout its existence collected numerous awards and trophies, such as the first prize from Sarga Del Mandorlo, Agrigento, Italia in 2007. 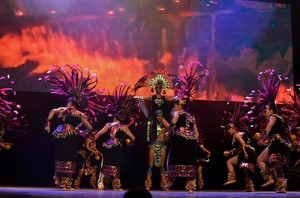 Arte y Folklor. MEXICO is a company which aims to constantly reinvent itself and believes that dance can combine cultural tradition with modern spectacles. The creativity of their members diversify the artistic content with productions of high quality.
The Company is a worthy ambassador of Mexican culture, preserves traditional regional dances.
It has done several presentations at the national and international level, and is the only company in all of Mexico that has the support and collaboration of the National University Folk Dance and the National Arts Institute, with a ISO 9000 certification of excellence and quality and the medal of art dance education. 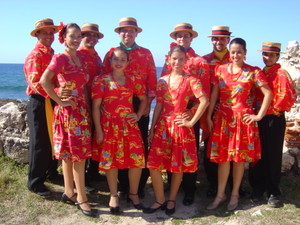 El Ballet Folklorico Guarionex was established in 1978 in the city of Morovis. Since that day with dance and music it represents and shares the essential part of their Puerto Rico identity. In amazing dances and performances members of the group recreate tradition and customs. They practice several types of folk dances, make their own music and colorful costumes representing their mixed culture. El Ballet Folklorico Guarionex is an official representative of the Puerto Rico Culture Institute and Tourist Company in Puerto Rico. The ensemble travels a lot, participates in many international festivals. Through dance spectacles they want to kindly invite the audience to travel across coasts and mountains of beautiful Puerto Rico.

The KUD Politehnicke Akademije „NOVI BEOGRAD” folklore ensemble was established in 1974. It has 450 active members, divided into 9 groups, which include the folklore, acting, drum and artistic groups. The group has participated in many festivals (in Greece, Bulgaria, Bosnia and Herzegovina, Montenegro, the Czech Republic, Germany, Ukraine etc.) where they have won many prices. 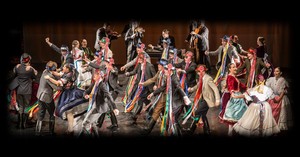 The Forras Folkensemble was established in 1984 at the Mihaly Vorosmarty Secondary School. Thanks to the regular patricipations of national festivals the group became very popular. After a few years the number of the dancers exceeded 500. After 9 years it received the highest professional accolade called „Golden 1”. In the last few years the group has visited more than 60 countries to popularize the Hungarian culture abroad. It has taken part in several International Folklore festivals in almost all countries in Europe, as well as the United States of America, Japan, Mexico, Puerto Rico, Syria, Egypt and Israel. The group’s repertoire is comprised not only of Hungarian dances, but also dances from abroad (Transylvania, Upland).
The prepared program aims to acquiant the most popular Hungarian dances, such as “Mezofold tancok” – the Transylvanian men’s dance, the bottle dance from Somogy, rabakozi dances – North-West Transdanubia, Csaszarszallasi tancok – Eastern Hungary, Kalotaszegi dances – Transylvania. 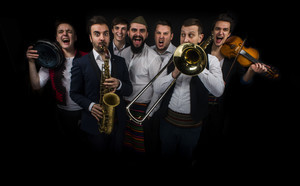 Bubliczki is a 7-piece revelry and music group with Kashubian rhythm and West Pomeranian grandeur. Since 2007 Bubliczki combines Balkan energy, Gypsy spontaneity and Jewish aura with Polish and Kashubian content. Playing on the biggest stages in Poland, they spread devastation and fright among all lovers of Balkan groove. They have recorded a long-playing disc „Opaa!” in 2010. In that same year they have made the music for the spectacle entitled „The Story of a Vicious Imagination” performed by the Pinokio Theatre in Łódź. Throughout their short existence they have received numerous awards: second place at Folk Nicholas Day in 2008 and first place in New Tradition (Polish Radio Festival) in 2009. In September 2013 the group has released their second album entitled „Trubalkan”, which has received third place in the Polish Radio Program 2 Folk Phoonogram of the Year. 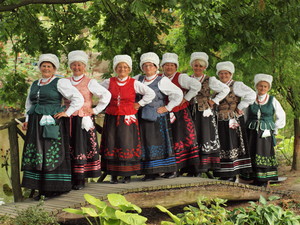 The Song Ensemble „PELAGIA” was established in 2007 in Leopoldów by the Foundation For Disabled and Socially Excluded People „TO BE” in the city of Ryki.
The group’s repertoire features folk songs from the Ryki region, religious songs: Lenteni songs, carols, pastorales, Easteri songs, songs of the Virgin Mary, partisan and patriotic songs of various periods, drinking songs and folk dances from south Forest Mazovia.

They have participated in many local, national and international festivals where they have won many numerous prizes and awards.
The group’s strength is their rich repertoire and beautiful original folk clothes from the Ryki region.