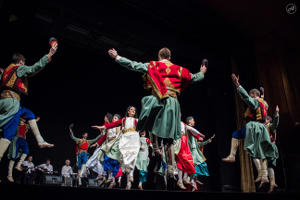 The „Crna Gora” ensemble was established in 2000 and has been a member of CIOFF® since 2003. Its main aim is to save folk dances and songs from being forgotten, to prepare them artistically and promote them. The group’s repertoire is comprised mainly of Montenegrin dances. The dancers are accompanied by a folk band.

The ensemble amazes with the dynamism of their dances, the high artistic level and beautiful costumes. It has taken part in folklore festivals in Spain, France, Portugal, the Czech Republic, the Netherlands, Austria, Belarus, Bulgaria, Macedonia, Greece, Serbia, Croatia, Bosnia and Herzegovina, Albania, Slovakia, Romania and Turkey. It has earned many important awards in its motherland and abroad. 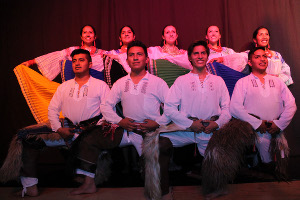 The „Danza e Identidad” ensemble („Dance and Identity”), was established in 2003 in the Educational Center in Quito. Its main aim is the realization of educational projects to teach and promote Ecuadorian folk dances among the populace of Quito.

In the 12 years of its existence, the ensemble has been the initiator of several cultural events and has performed 423 times, taking part in many festivals and competitions, earning many awards, diplomas and acknowledgments. The group has given concerts in Peru, Switzerland, Italy and Poland, among others. Its repertoire features choreographies from various provinces of the Ecuadorian highlands: Tungurahua, Chimborazo, Azuay, Loja, Imbabura i Pichincha, as well as the rhythms of Sanjuan, Capishca, Tonada, Pasacalle, albazo and bomba.

During its concerts the audience can see and hear the following instruments: the charango, the bandolin, the quena, the pan flute and chagchas. 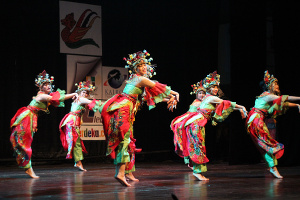 SMA AL AZHAR 1 was founded in 2000 in Kembangan and is one of the best and most famous dance schools in Jakarta, the aim of which is to spread, promote and cultivate the traditional folk culture of Indonesia. The group has presented Indonesian culture at many festivals, in Italy, Turkey, the Netherlands, Bulgaria, Germany and Poland, among others. The folk band accompanying the ensemble plays such traditional instruments as: the saron, the kenong, the tambur, the gendang, the ketimpring, the darbuka and the flute.

Israel
“Jerusalem of Gold” from Jerusalem 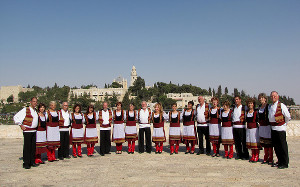 Having existed for over 5 years, the ensemble strives to constantly explore and give new life to various folk dances, from Israel and beyond. It has a rich and varied repertoire to meet the demands of various audiences.

”Jerusalem of Gold” gives many concerts in Israel and abroad as the representative ensemble of Jerusalem.

During its Polish tour the group will present dances related to Jerusalem, the holy city of all religions, as well as dances inspired by the culture and influences of various ethnic minorities living in Israel.

The group’s dancers live by the following motto: „One can dance at any age – it’s never too late!”. 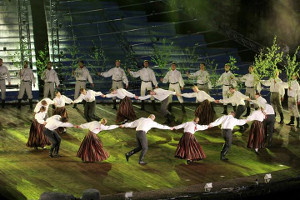 The folk dance ensemble „Skalbe” is a student ensemble. Students have come to Jelgava from all over Latvia to study, dance, sing and enjoy their lives. For its dancers working with the ensemble isn’t just a way of spending free time, but also their passion and love. What brings them together is their love of dance.

The group’s repertoire features Latvian dances and choreographies prepared by famous Latvian choreographers. The dance steps and figures are based on ancient Latvian mythology. The dances presented by the ensemble often depict everyday activities of people living in Latvian villages of old. 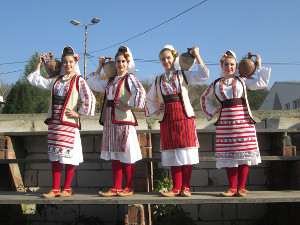 “ZAPLANJSKI VEZ” is an amateur association established in 1989. It currently comprises about 180 members in three sections, including the folklore and music sections.

The ensemble has taken part in several competitions and festivals to much success. It gives many concerts in Serbia and abroad, having visited Germany, Ukraine, Poland, Italy, the Czech Republic and Greece and other countries. 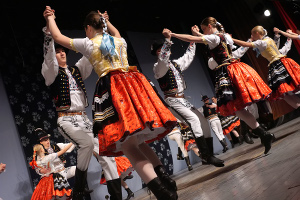 The ensemble was established in 2011 and comprises 48 members, young dancers, soloists and musicians filled to the brim with impeccable dance technique and spontaneous expression.

The group draws inspiration mainly from the treasure trove of folk traditions from the east of Slovakia. Its repertoire also features songs and dances from all parts of the country. The dance choreographies are characterized by ethnographic fidelity and authenticity. The group also puts emphasis on the preservation and restoration of authentic folk attire. „JUROŠIK” is among the very best amateur folklore ensembles in Slovakia.

During its short existence, it has taken part in several international folklore ensembles in Germany, Italy, Spain, Portugal, Turkey and Cyprus. 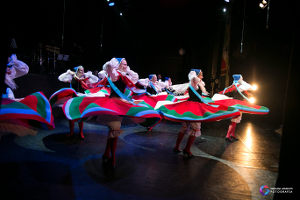 The Song and Dance Ensemble „Warszawianka” is the representative ensemble of Warsaw University. The artistic program of Warszawianka’s youth group features dances and songs from various regions of Poland. The youth of „Warszawianka” takes part in National Tournaments of Polish Dances to much success, having earned several championships and Dance Pair of the Year titles in the Polish National Dance ranking.

The group has gone on several tours in Poland and abroad. The beautiful youths, picturesque Polish national costumes, captivating songs and dances have amazed audiences in France, Portugal, the Azores, Macedonia and Sicily.