The “Krupitskye muzyki” ensemble was established in 1982 by Vladimir Grom, director of the culture centre in the Krupitsa village. Together with choreographer Georgi Chorny they created one of the best amateur folk ensembles in Belarus. Its repertoire is comprised of traditional Belarussian songs and folk dances presented in a picturesque way: fascinating instrumental melodies, lyrical and jocular songs, original choreographies and traditional dances. The ensemble has performed several times in Belarus, as well as abroad, receiving many awards at festivals and competitions. The folk band which accompanies the ensemble plays traditional instruments, such as: the accordion, the violin, dulcimers, the basetlya, the pipe, drums and the tambourine.

The Calahuala ensemble was founded in 1988 during the summer workshops of the Vicariate For Pastoral Work. It aims to study the traditional culture and understand the various Chilean customs and their artistic elements by meeting local communities in various parts of the country. Its members, mainly teachers educated in different forms of art, share their knowledge through ongoing workshops. The group’s repertoire features musical and choreographic forms learned from culture researchers and farmers. Over the course of 20 years of its career, the ensemble has performed on many stages, both in Chile and abroad, faithfully presenting the charm of traditional dances and songs, also at international folklore festivals: in 1996 in Havana, Cuba at the „Casa de Las Américas” festival, in 1999 in Zacatecas, Mexico at the „IV Festival Zacatecas del Folklore Internacional” and in 2000 during the 33. Festival Nacional del Malambo in Córdoba, Argentina. The ensemble’s folk band plays traditional instruments, such as: the guitar, the violin, the arpa, the mandolin, the tarcas, the tambourine, rattles, the zampoña, the quena, the redoblante, the tipple, the traversa, rebels and the hype. 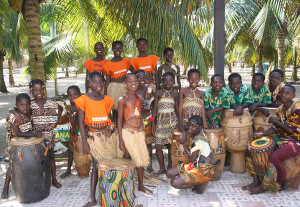 The „FREESPIRIT” folk ensemble is the result of a cultural project backed by the Freespirit Foundation, which has worked with children and youths since 2007 to learn and cultivate Ghanaian culture, especially local traditional dances. The groups repertoire features several traditional folk dances originating in various parts of Ghana, as well as other African countries, including Togo, Senegal and Uganda. Since its inception the ensemble has participated in several cultural events and festiwal, including the esteemed Panafest festival and the very important Fetu Afahye festival in Cape Coast, the capital of the Ghana Cental Region, in September 2012, with the attendance of authorities of the region and the president of Ghana. In 2013 the ensemble participated in 3 international festivals in Europe: the 26th Festival des Enfants du Monde in Saint-Maixent L’Ecole, France, the 21st International “Children of the Mountains” Children’s Regional Ensemble Festival in Nowy Sącz, Poland and the 12th International Children’s Folklore Festival in Zielona Góra, Poland. During the performances traditional African fontomform, atumpan, kpanlogo, ewe, dundu, dondo, jembe, blekete drums are used, as well as the gukogui and horns for the special royal ceremony.

The Toska Folk Song and Dance Ensemble was established in 1992 on the foundation of the Vanco Prke association established in 1944. It currently comprises over 300 members in the folk ensemble, national orchestra, vocal group sections and others. The ensemble gives numerous concerts in Macedonia, while also taking part in several international and intercontinental festivals organized by CIOFF®, receiving several awards and accolades. The group has been on tour to Portugal (Porto in 1990 and Santarem in 2010), England (1986), Germany (1987), Finland, France, Poland, Belgium and Luxembourg. Its repertoire is rife with dynamic dances and melodic songs, including songs from Skopje and the Aegean part of Macedonia. The ensemble is also the organizer of several national festival and has its own radio and TV station. Its folk band plays such instruments as: the harmonica, the clarinet, drums, the guitar and the contrabass. Toska is a true representative of Macedonian culture, as well as an ambassador to Macedonia in Europe and the whole world over. 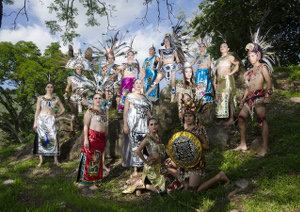 The „Ballet folklorico TLALOLINI” tierra en movimento („earth in movement”) folklore ensemble was established on November 21st, 1998 in Buenavista de Cuellar in the state of Guerrero in Mexico to cultivate and promote the beauty of Mexican folklore. Professor Carlos Uribe Garcia is its director, choreographer and founder. It consists of 3 age groups: children, youths and seniors, who are accompanied by a mariachi band. During those 16 years the ensemble has taken part in several festivals and concerts, both in Mexico and abroad, including Italy. Its repertoire is comprised of dances representing virtually all states of Mexico, presented in beautiful, multicolored and authentic attire, as well as pre-Spanish dances. Its folk band plays such instruments as the violin, the vihuela, the trumpet, the guitarrón and the guitar. 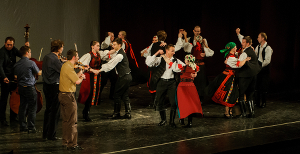 The ensemble was founded in 1995 by the János Apáczai Csere High School as the second folk dance ensemble in in Cluj-Napoca representing the Hungarian minority in Romania. The current line-up is comprised mostly of graduates and students of that high school, 10-13 dance pairs in total. One of the group’s main aims is to practice traditional Transylvanian dances and present them on stage in their original form. Szarkaláb regularly takes part in national and international programs and festivals. Since 1995 it has given approx. 340 performances. It has danced in numerous places in Transylvania, as well as over 16 European countries, including Hungary, Austria, Germany, Switzerland, France, Slovakia, Poland, Lithuania, Latvia, Estonia, Finland, Croatia, Slovenia, Serbia, Greece and Portugal. The group is maintained and supported by the Heltai Gáspár Library Foundation. The group’s musicians play such instruments as: the violin, the contra, the contrabass and the accordion. 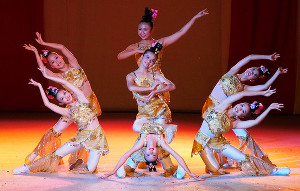 The ensemble, founded in September 2007, is comprised of highly-trained musicians, teachers and students aged 12-22. Its aim is to promote traditional Taiwanian folklore at international events. Its repertoire features stylized dances based on traditional folk dances with the accompaniment of traditional Chinese instruments: liuye chin, erhu, di, liuqin, the Chinese flute and Chinese violin. The ensemble has represented its country in 2008 during its tour of Italy and also international folklore festivals in Portugal and Spain (2009), Belgium (2010), France (2011), Switzerland (2012) and USA (2013).