The Lapta Municipality Folk Dance Group was established by the Lapta Municipality in 2008. It aims to promote the old Cypriot culture in the form of folk songs and dances. The ensemble has participated in the Turkish Fomed Big Ankara Festival and Fomget Istanbul Cultural Meeting, as well as the Macedonian Osmangazi festival.

The “Momavali” (“the future”) dance ensemble was established in 1991 by the Erisioni association. The focus of its activities is to promote Georgian folk dances and songs among children. The ensemble has already performed in Turkey, Cyprus, Russia, Bulgaria, Greece, Italy, Spain, Germany, Belgium, Romania, Poland, Syria, Jordan and other countries. 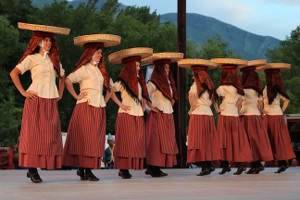 The Folk Art Group “De Krekels” was established in 1973 in Bonheinden, a village located between Brussels and Antwerp, in Flanders, the Dutch speaking part of Belgium. The ensemble’s repertoire is comprised entirely of Flemish folk dances representing folk traditions such as farming and weddings, as well as stylized mazurkas, polkas and waltzes combined with the accompaniment of Flemish music and traditional flag waving. The ensemble’s performances are bolstered by traditional costumes adapted to the given dances, as well as accessories such as wooden shoes and wicker baskets carried by the women on their heads. The ensemble has been on tour in countries such as the Netherlands, Germany, France, Sweden, Great Britain, Austria, Switzerland, Hungary, Portugal, Spain, Bulgaria, Estonia, Greece, Turkey, Tunisia, Israel, Canada, USA and many more. 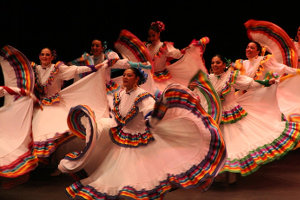 Compañía Nacional de Danza Folklórica Estampas de México was established in 2005 by teacher and choreographer Carlos Islas in order to cultivate the traditional culture and art of Mexico. The program of the ensemble is comprised of the following dynamic and spirited dances: Danza Azteca, Huasteca Hidalgo, Chihuaha, Veracruz, Bamba, Nayarit and Balisco. They are accompanied by authentic traditional music played on such instruments as the trumpet, the violin, the vihuela, the guitarrón, the jarana and the huehuetl. The ensemble has participated in several national and international festivals, e.g. the 13th Festival Mundial de Danzas Folklóricas (Palma de Mallorca, Spain) and “Maravillas de la Infancia” International Festival (Matanzas, Cuba).

The “BUDUĆNOST” ensemble was established in 1985 in the town of Dobanovci, located about 20 km from Belgrade. Currently the group is comprised of approx. 250 people in three sections: folklore, musical and veteran sections. Their program is comprised of dances from various parts of the former Yugoslavia. The ensemble has taken part in several regional and international competitions and folklore festivals in countries such as Poland, Germany, Luxembourg, Portugal, Greece, Italy, Hungary, Slovakia, Bulgaria, Turkey and many more. 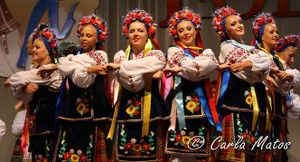 The Folk Amateur Dance Ensemble “Volynyanka” of the Lutsk Palace of Culture was established in 1959. Its repertoire is comprised of Ukrainian folk dances and songs of the Volyn region. Over the years it has represented Ukrainian folklore at international folklore festivals in Russia, Poland, Hungary, Moldova, Belarus, Yugoslavia, Greece, Malta, Tunisia, Lebanon, Germany, the Czech Republik, Slovakia, Slovenia, Austria, Israel, Sweden, Portugal, Luxembourg, Egypt, Turkey, England, China, Switzerland, Belgium and Holland. Since 1964 it is accompanied by a folk band playing such instruments as the kozabas, the buhay, the sopilka (fistula), the nay and the volynka (bagpipes). The ensemble is also a member of the Ukrainian section of CIOFF®.