The „Kallpañan” Folkloric Ballet („marching on with strength”) was founded in 2003 under the artistic direction of Lorena Nieto and is comprised of people with artistic expertise gained though participation in various dance groups. Special emphasis is put on promoting the folklore of the Andean region. The ensemble has shared the staged with several Ecuadorian and foreign artists on several occasions (e.g. Getsary, Amark, Sierra India, Jayac, Song of the Wind, Gerardo Moran). It is a laureate of the Latin American Art Review in 2010 as the best ballet. 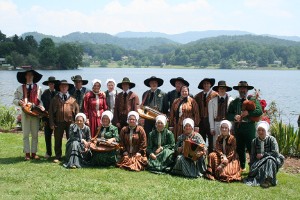 The „Les Enfants du Morvan” folk ensemble was founded in 1946 in order to promote the tradition and art of the Morvan region, based on an association formed in 1899 by the inhabitants of Morvan, who had moved to Burgundy seeking work. The ensemble’s repertoire features approx. 80 dances from the 19th century, the choreography of which is faithfully reproduced. They include: bourrées – the most typical dance form of the Morvan region, branles, polkas, mazurkas and waltzes. The ensemble’s mission is to share with the audience the happiness brought by music and dance, as well as spreading the tradition of Morvan. The ensemble’s band uses only traditional instruments such as the hurdy-gurdy, bagpipes, the diatonic accordion and violins. 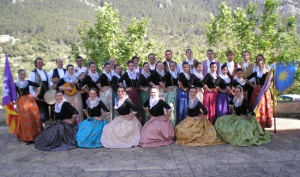 The Aires d’Andratx folk dance ensemble was founded in 1986 thanks to a group of enthusiasts and connoisseur of local folklore. It currently comprises almost 100 people, including the young non-professional grup of 40 musicians and dancers. The ensemble is part of the Mallorcan Federation of Music and Dance. In recent years Aires d’Andratx has taken part in international festivals in Galicia, Murcia, Barcelona, Ibiza, Bilbao, Valencia and CIOFF festivals in Portugal, the Azores, Serbia and Burgos, winning the World Folk Dance Festival twice. The ensemble promotes its country’s most popular type of dance – the bolero, in forms appearing in different regions of the island. 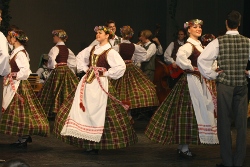 The Folk Song and Dance Ensemble of the University of Pedagogy Šviesa was founded in 1954. It is comprised of students of different specialties. Its repertoire features not only Lithuanian songs, dances and folk melodies, but also modern pieces based on the best folk traditions. The band uses traditional folk instruments – kankles, whistles, reeds and wooden bells. Šviesa is a regular participant of the National Festival of Lithuanian Song, which is part of the UNESCO list of intangible heritage, as well as the “Gaudeamus” Student Song and Dance Festival of the Baltic States. The ensemble has also won awards of many national and international festivals. The most valuable of them is the “Golden Warbler” won in 2004, an award of the Lithuanian Ministry of Culture for the best amateur ensemble. Šviesa has given over 2000 concerts, visiting Germany, Spain, Italy, USA, Poland, Russia, Israel, Greece and several others. 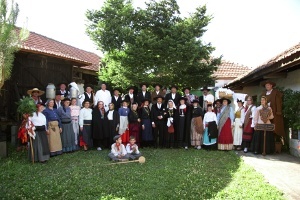 The Rancho Folclórico e Etnográfico de Vale de Açores ensemble was founded in 1978 in the former seat of dukes and kings, the beautiful village of Vale de Açores, surrounded by the Caramulo and Bucaco mountain ranges. The ensemble’s aim is to preserve the tradition of the region not only in music, dances, folk songs, attire and legends, but also historical heritage. It faithfully represents the true folklore of the region ranging from Aveiro to Coimbry and Viseu. Thanks to its efforts for preserving tradition, the ensemble became a member of the Portugal Folklore Federation and was given the official recommendation of the municipal authorities of Mortágua, and in 2002 was given the Golden Medal of the City in recognition of its achievements. 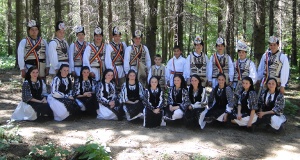 The folklore ensemble of Sinca Noua, Brasov County was founded in 2007 by initiative of the mayor of Sinca Noua, Dumitru Flucus. It represents traditional dances and folk music of the Faragas, Transylvania, Hartbaciu and Codru regions. The folk band directed by Cosmin Hristea uses such instruments as: the saxophone, the accordion, drums, whistles and violins. The ensemble has participated numerously in competitions and folklore festivals, both nationally and abroad: in Germany, Turkey and Hungary. 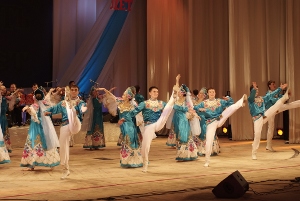 The „Yunost” Folk Vocal and Dance Ensemble of the National Art Center of Altai, founded in 1986, comprises over 300 members making up the ballet, vocal, instrumental groups and the children’s preparatory group „Kalinka”. It is said that the ensemble possesses a “Russian soul” – for over 40 years it has presented only Russian folk songs, dances, mainly from the Siberia region. The ensemble has presented Russian culture in 56 countries, at several festivals and competitions, earning many awards and commendations. The band uses traditional instruments such as: domra, balalaika, accordion, bass and drums. 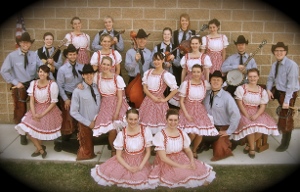 CLOG AMERICA is comprised of excellent dancers and musicians, who since 1991 have had the honor of representing USA at 64 festivals and cultural events in Eastern and Western Europe, Canada, Mexico, Brazil, Korea, China and USA. The ensemble has appeared on national TV in Germany, the Czech Republic, France, Holland, Brazil, Macedonia, Hungary, Turkey and USA. In 2004 the ensemble represented USA in the World Folkloriada, which takes place every 4 years, and was the first American ensemble invited to the International Folk Art Festival in Shanghai. CLOG AMERICA’s repertoire features dances depicting the young, energetic and varied culture of the United States of America. The dancers specialize in clogging, an American dance form which originated in the Appalachian region and shows influences of European settlers from England and Holland, native American tribes and African slaves. The ensemble also performs dances representing different periods from American history. The band is comprised of musicians playing violins, the banjo, guitars, mandolins, bass and percussion instruments. The ensemble organizes several humanitarian efforts for children, supporting respective organizations through meetings and performances for children, as well as material aid. This year the group has helped the „Krok za krokiem” Association of Help for Handicapped Children.