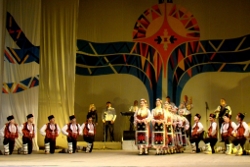 The ensemble was founded in 1945 in Burgas.

It has performed in Belgium, Norway, Turkey, Holland, Poland, Russia, Afghanistan, Indonesia, Macedonia, Croatia and Japan, among others. 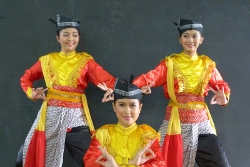 SMA AL-AZHAR Jakarta presents dances of several provinces of Indonesia, performing in characteristic costumes with the accompaniment of traditional instruments such as the gamelan, the gendang or the ketimpring. Each dance presented during the concert has its symbolic meaning, e.g. the Salama dance from Suwalesi, which is an expression of happiness and gratitude towards the Almighty for a prosperous life. The atmosphere of a good, plentiful harvest is expressed here in form of beautifully arranged movements.

The ensemble has been on to Malaysia, China, Turkey, Holland, Germany, Poland and Italy. 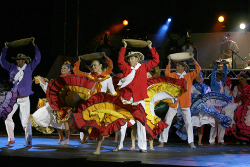 „La Fundación Artística del Tundama” is an NGO founded in 1997 by Felisa Hurtado. The foundation consists of dancers with an interest in Colombian folklore and culture.

The ensemble presents the folklore of various regions of Colombia, the Atlantic coast, the Pacific coast and the Andean region. 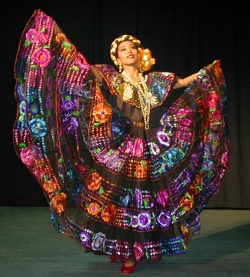 Ballet Folklorico Orizaba IRBAO was founded in 1970 as part of the Regional Institute of Fine Arts Orizaba, IRBAO.

Their line-up comprises approx. 40 dancers and musicians presenting the dances, customs and attire from various regions of Serbia. 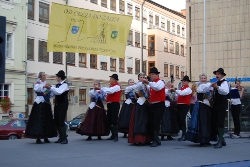 The ensemble was founded in 1962. Its members are amateurs united by their love of tradition and national heritage. The dance ensemble is accompanied by the „Alpine” folk ensemble.

„Grifon” has presented its program at festivals in Austria, Holland, France, Turkey, Portugal and Italy.

It is also the organizer of the International Folklore Festival in Zalec.

The ensemble was founded in 1957. It is comprised of students of the Agriculture University of Halaszi. The ensemble presents mainly the music and folk dances of the Carpathian region. The dance group is accompanied by the „Kislaptaros” and „Radak” folk bands. The ensemble has given concerts in France, Austria, Belgium, Turkey, Slovakia, Poland, Lithuania and Germany, among others. The ensemble has won many awards at Hungarian folklore festivals. 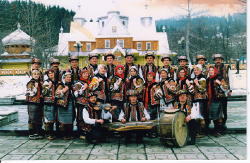 This family ensemble was founded in 1982 in the village of Vipche, which has a long history of cultivating Hutsulian traditions and customs. It was founded by Vasiliy Vandzhurak, who had directed the ensemble for 12 years. In 1994 his brother, Michael Yuriyovych, has taken over for him.

The ensemble has gained popularity after its first performance at the regional folk art review organized annually in Verhovina. It has also won awards at regional Hutsulian festivals. Presenting Hutsulian art, it has earned recognition not only in Ukraine, but also abroad – in Poland, Belarus, France, Russia, Hungary and Lithuania.