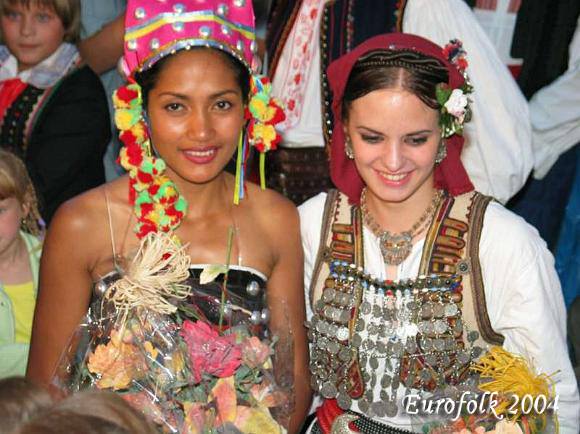 Program of the festival

Finally, when the preparations were finished, the program set and the guests came to Zamość, the hosts started to making their aims reality.

On the first day the ensembles from China and New Zealand presented their programs. Their dance, very exotic for Poles, were watched with great interest. The costumes, instruments, dance choreographies and the dancers themselves, so different from Poles. However, friendships were quickly made and everyone felt great and had fun together.

On Thursday the directors of the ensembles and representatives of the dancers went to City Hall, where they met Mrs. Maria Gmyz, chairperson of the Zamość City Council.

On the same day in the afternoon, a procession encompassing all the ensembles set off from the Zamość House of Culture for the Old Town. At the Great Market Square all of the invited dancers, as well as the dancers from Zamojszczyzna, danced a traditional polonaise which opened the 3rd International Folklore Festival „EUROFOLK – Zamość 2004″.

In the evening, in the Orbis hotel in Zamość a press conference was held with the participation of Mr. Jerzy Chmiel, the president of the Polish section of CIOFF&reg, the directors of the ensembles and the organizers.

On Friday the concerts at the Great Market Square started according to plan at 6PM. The following ensembles danced: „Zamojszczyzna”, Ukraine, Bosnia and Herzegovina, USA, „Zamojszczyzna”, ending in a performance the „Swoją Drogą” folk ensemble. Very late in the evening, after a day full of work, all members of the ensembles and the organizers met up for a bonfire in the OHP dormitory at Kilińskiego street. Sausages were roasted, bigos was eaten, and after a short respite everyone sang and danced again.

The inhabitants of Zamość were “mixed” with the guests without their folk attire and became one. Since everyone had been dancing for several years in their groups, the dance lesson directed by the dancers of Zamojszczyzna posed no difficulty for anyone. The youths who were having fun, had difficulty in distinguishing the nationalities of one another.

Everyone took a liking to the ensemble from New Zealand. Everyone listened with great interest to their song of an ancestor who swam on the back of a whale, a song about their creator, a flirtatious girl’s song to the boys, a funeral song and a war song sung first by the women, then the men. During the performance of the funeral and war songs, the expressions on their faces changed and became increasingly menacing, which was quite the spectacle to behold.
Although their dance was limited to small steps, their expressive song gave rise to many emotions not only in the audience, but also the performers themselves. Some of the female dancers cried on stage during the song about the creator, which had a strong emotional impact on the audience.

The Sunday evening promised to be very interesting, since the results of the miss and mister pageant, the audience’s favorites, were to be announced. It was the audience who were given the right to decide who would be granted those titles. The lucky winners turned out to be a male representative of New Zealand and a female representative of China.

The finale concert came to a close, but the evening went on. The guests and hosts alike partied together during the disco held in the OHP dormitory at Kilińskiego street in Zamość.

„…The festival in Zamość is held due to the tradition created by the Song and Dance Ensemble „Zamojszczyzna”, existing since 1985…”

„Zamość. Over 300 musicians and dancers from all around the world took part in the Eurofolk 2004 festival…”
„…The record was set on Sunday when the finale concert at the Great Market Square was viewed by a few thousand people. The organizers of the festival (the Association of Friends of the Song and Dance Ensemble Zamojszczyzna, directed by Jolanta Kalinowska-Obst) deserve a round of applause for making such a successful event a reality…”